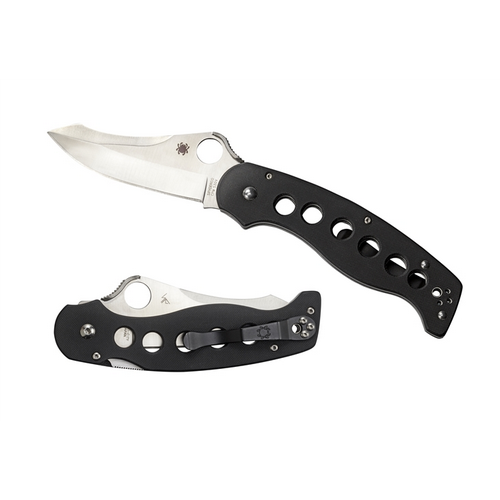 The Spyderco A.T.R. (At The Ready) 2 folder knife is one of many new folders released by Spyderco this year. Originally released in 2003, the original A.T.R. became an instant cult classic the instant it was discontinued. The favorable redesign now features a saber ground CPM-S30V blade and, true to the original design, incorporates a cobra hood to further assist in easy one-handed operation. The A.T.R. 2 utilizes Spyderco's patented Compression Lock mechanism--allowing users to safely close the blade with one hand without ever having the operating hand come near the cutting edge. This knife is part of Spyderco's Specialty Folder family which includes collaborations with some of the world's most reputable knifemakers and showcases dedicated personal defense tools coupled with numerous outside-the-box designs that adds scores of value. This model, the C70GP2, features a black textured skeletonized G-10 handle, a satin finished clip point blade, skeletonized stainless steel liners, Spyderco's trademark round hole opening feature and an ambidextrous 4-way positional pocket clip which allows for a tip up or tip down carry option on either side of the handle.
×