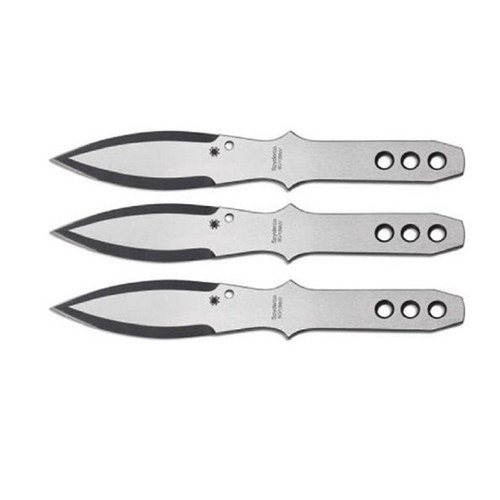 Spyderco and Canadian custom knifemaker Harald Moeller have joined forces to produce Spyderco's first set of throwing knives--the SpyderThrowers. Moeller is certainly no stranger to designing throwing knives as his models have been regarded as some of the best-made in the world. The product of extensive research to produce a throwing knife that more consistently reaches and sticks to its target has finally arrived. Offered in sets of 3 as well as in 3 different sizes, the Spyderco SpyderThrowers are machined from thick stainless steel and boast a two tone finish--predominantly in satin, but with a black oxide finish on both the bevel as well as running down the width of the handle. This set, the TK01LG, features 3 large-sized throwing knives that are just over 11 long with 6.52 dagger ground blades. Each set also features a tiered leather sheath and each knife still showcases Spyderco's trademark round hole.
×